After bushfires have burnt through Australia and droughts and floods become more intense, the reality of climate change is now hardly disputed. It is also quite normal to accept that whatever our party-political views, we all have our bit to play in doing something about the climate. It’s now accepted at every level and by every stripe of government, and by corporations and unions, that they have a climate job to do even if there is disagreement about what that job should be. 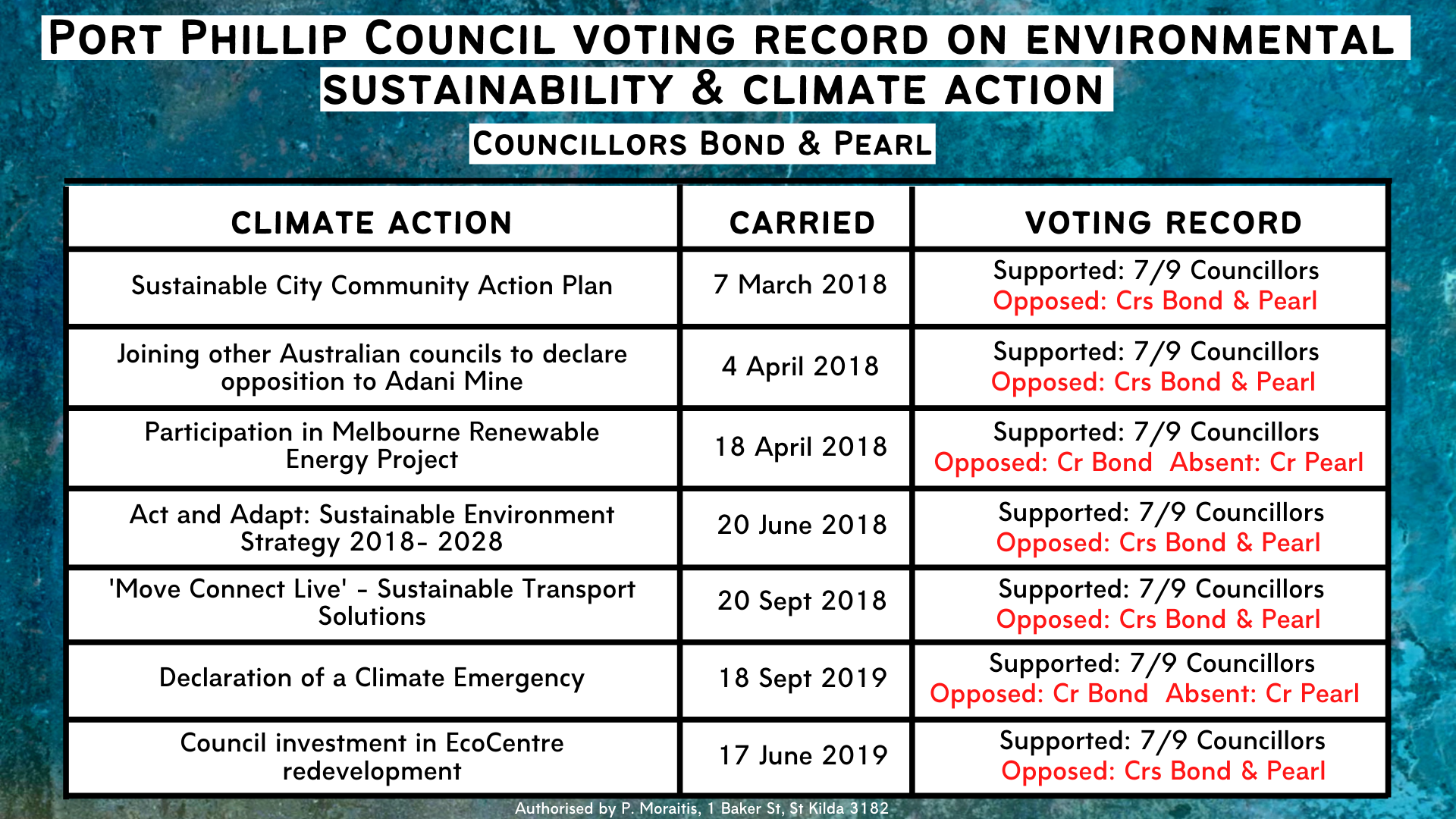 Let’s examine some of these decisions. In 2018 a sustainable city community action plan was developed by Council. It proposed things like making it easier for residents, including people living in apartments, to put solar panels on their roof, developing new ways of recycling waste and clothes — pretty sensible low-key ideas. Out of nine councillors, Councillors Bond and Pearl were the only ones who voted against it.

Council was given the opportunity to cut greenhouse emissions down to zero on all its buildings and facilities by joining with Melbourne Council and other big organisations to buy bulk green power. This power would be even cheaper than Council was paying for its ordinary non green power. Again, the vote on council was seven for and two against.  Since then the council has saved on electricity and, as expected, cut its emissions virtually to zero.

Again in 2018 a transport strategy was considered by Council to reduce traffic, better synch the public transport in the municipality, and create more bike paths. More low-key, climate friendly sense. More cars come into Port Phillip than any other place in Victoria except the CBD and the population of Port Phillip is set to boom. Opposed by Councillors Bond and Pearl.

In 2018, hundreds of Port Phillip residents presented Council with a petition to follow the lead of many NSW seaside councils, to publicly oppose the Adani mine in Queensland.  The reasoning was that Port Phillip with 12 kilometres of shoreline will be severely impacted be rising sea levels and councils should advocate to other levels of government on behalf of their residents. Seven of nine councillors agreed with the community petitioners, passing a motion to write to the Prime Minister to voice Council’s opposition to the mine. Councillors Bond and Pearl opposed the motion. Since then, insurance firms and companies from across the world have refused to involve themselves with the Adani mine and not one gram of coal has yet been mined.

You might reasonably think that 2018 was quite a while ago and many people, even conservative people, have changed their views since then. But that has not been the case with Councillors Bond and Pearl.  In very late 2019, following half the Great Barrier Reef declared dead, millions of dead fish bubbling to the surface of a dying Darling River, bushfires raging in Queensland and NSW from early spring, Port Phillip Council joined one hundred other councils across Australia to declare a climate emergency. Councillor Bond opposed this decision while Council Pearl was absent from the council meeting.  In June 2020 Councillors Pearl and Bond opposed redeveloping the Port Phillip EcoCentre building, a unique national award-winning institution, even if matching funds from the State Government or other parties would pour into Port Phillip to fund the works and provide local economic stimulus. Fortunately, the other seven councillors saw the question differently and both the budget and the conditional funding for EcoCentre redevelopment were passed.

You may be under the impression that Councillors Bond and Pearl have been standing up for their values in the face of a radical, far-left council. But that is hardly the case. Of the nine councillors, two are independent, two are affiliated with Labor, and three councillors are members of the Greens. We have had a pluralistic, pragmatic council.  Indeed, many constituents believe it has not been progressive enough.

Councillors Pearl and Bonds’ voting record on climate issues is difficult to explain.  Blue chip corporations like BHP and Blackrock are turning away from climate damaging investments; the Australian Defence Forces have declared climate change a national security threat; Europe is pouring billions into green infrastructure and China, the world’s biggest greenhouse gas emitter, has pledged to become carbon neutral by 2060.

We all start somewhere with our views. In the case of climate change, that may be scepticism of its human cause or the idea that responsibility for dealing with the problem lies with others. But as the climate reality unfolds, and as the need for action at every level becomes apparent, conservative people who examine matters on their merits have changed. But that has not been the case with Councillor Bond and Pearl, whose pattern of opposition to even small-scale action continues.

In the upcoming local government election, Councillors Bond and Pearl hope to be joined by candidates from the Rate Payers Association of Port Phillip (RoPP) to form the dominant group in Council. The existing evidence of Councillors Bond and Pearl’s voting record clearly shows their views on climate issues and what we could expect in the future if they and their allies control Council. We urge you to consider the bigger climate picture in the upcoming City of Port Phillip election and support candidates who understand the need for Council to take serious local climate action.